The Troubles of Teamwork 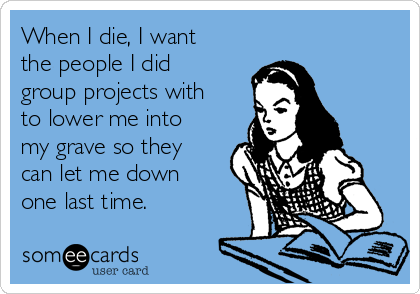 One nightmare that has invaded the otherwise peaceful slumber of nearly every student at Quartz Hill High School is the horror of group projects or assignments. A plethora of students struggle to work with their unwilling partners to produce an essay, slideshow, or otherwise simple piece of work. Attempting to complete an assignment with other students can be nearly impossible, especially when the groups are chosen by the teachers. Group projects are less likely to aid students with teamwork skills for the future than they are to bring students down in the present. Teachers often give each each individual the same grade based on the overall performance of the group. This system of grading, however, is entirely unfair and unhelpful to asbbffhcxgxygdddthe students who put in the effort for the project.

Many students with good grades or reputations as diligent students have experienced the painful situation in which the teacher groups them with some students who are known for their lack of effort and responsibility. The teacher does this in the hopes that the students without motivation will be pushed along with the strong tide of the more intelligent student’s determination to get an A+ on the assignment. The hopes of these instructors are futile, despite their conviction of the effectiveness of this strategy. Of course, the students who put in less effort are the only ones that benefit from this arrangement, leaving the responsible student to complete the bulk of the project, often the entire project, while giving the others credit for the work they did not do in order to avoid appearing as an overly controlling leader.

These students do virtually nothing to assist the leader of their group, and when they are questioned about the lack of evidence of their nonexistent efforts, they accuse the leader of tyranny and claim that they felt overwhelmed by their leader’s fast pace and “bossy” countenance. The leader is then accused of overpowering the other students, when, in truth, the leader had no choice but to take over the project, since no progress was made without the leadership of the responsible student. The student’s reputation is marred, and the project receives a lower grade than it deserves due to the “lack of teamwork.”

The wronged leader must then accept their disgraceful grade, despite their countless efforts to bring the group together and work with their teammates to create a collaborative assignment. The others in the group manage to spend all of their designated work time doing absolutely nothing useful, leaving their minds empty and the leader’s grades lower than they should be. Teachers’ grading criteria for group projects is unfair, and their judgement when placing one or two responsible students in a group of irresponsible ones is unwise.