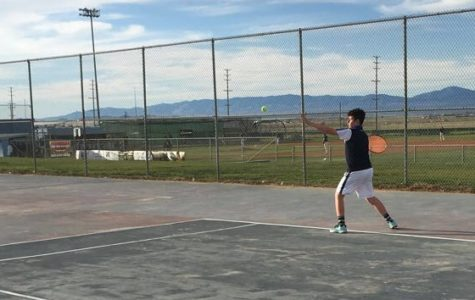 The Quartz Hill Rebel boys’ tennis team has continued to dominate this season. The team was able to sweep the top two spots during the singles and doubles matches at the Golden League Finals. The hard work and dedication the team has put in has clearly shown results in the team’s performance, continuing the Rebel legacy, as the team also won the top two spots in Golden League Finals last year.

The doubles team, consisting of Henry Andrews and Alec Shirley, were able to beat both Connor Cheng and Albert Wuelleh, during the finals. (6-1, 6-1).

Isaac Kim also won his second consecutive singles title this year. He was able to sweep his matches with a score of (6-2, 10-8) against his teammate Weston Allen.

Alec Shirley stated: “I am really proud of the way I performed during this match. Our chemistry has improved a lot since we first started playing together as a doubles team. We always rotate positions properly and my serve was on point this game. I only double-faulted twice, and Henry played really well, especially at the net. We started the season out strong, and we are continuing to play well and stay strong. The next goal is to win CIF finals in southern California for our division. That’s one of the biggest goals we have as a team and we are working hard to make it happen.”

Bailey Kwok stated, “Even though I did not get the chance to play today, I am happy with how the team played. During the championship, two of our doubles teams were competing against each other, which was really entertaining. Our doubles teams are really strong this year compared to last year, and since both of ours advanced to the final, we know where we stand as a team. I would say that we are contenders for CIF finals, and I am sure that we can advance farther than we did last year.”

If the Rebels continue to maintain this momentum into CIF, they will surely advance to finals and may be able to win CIF. If they are able to do this, the team will raise their National Division Ranking. Also, many of the players could get scouted from high ranking Division 1 universities. This could lead to many prospective scholarships and offers from these schools. Nonetheless, come out and support our Rebels during the next game!