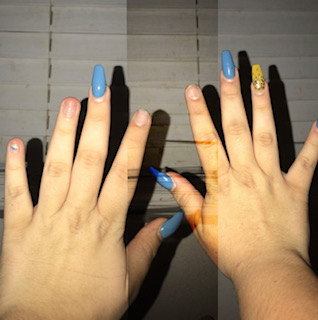 In the criminal justice system, violence based offenses are considered especially heinous. In New York City, the dedicated detectives who investigate these vicious felonies are members of an elite squad known as the Sibling Victims Unit. These are their stories.

Emma DeAscentis, a junior at Quartz Hill High School, was viciously assaulted two weeks ago during her lunch period for all to see. It took her weeks to finally gather up the courage to come forward. Reader discretion is advised.

For DeAscentis, that fateful Friday the 16th was a normal one. She met up with her friends to eat lunch as they usually did. They would chat, work on homework, and occasionally play intense games of UNO. But unfortunately for DeAscentis, the day would soon sour and quickly go from normal to nefarious. She would not see the shadow of dark miasma and malicious intent until it was too late.

The horrible onslaught of blows first began with a simple paper cube. DeAscentis and her friends had made some paper cubes in their prior classes. During lunch, they took to throwing those cubes at their friends, which devolved into a battle of sorts. Cubes were flying through the air when one happened to strike DeAscentis’ brother (who will remain unnamed for legal reasons). We later reached out for comments from the other DeAscentis sibling, but our requests remained unanswered. But, we at the SVU did not need a statement to know what took place that day.

Witnesses described the assault as quickly escalating. The paper cube that started it all was thrown back and forth with quick succession between the two siblings, but that evolved into slaps, which evolved into harsh blows and kicks. At some point, an eyewitness, who wished to remain anonymous, claimed to have seen a sleek metal chair rain down on Emma DeAscentis’ hand, which allegedly crushed her fingers and removed a majority of her nails on both hands. The scene was described by the witness as a torrent of blood. The SVU can neither confirm nor deny these claims at this time. All we can confirm is that this altercation went on for several moments before the younger DeAscentis fled the scene, leaving the older DeAscentis on the withering grass, bleeding.

Following the altercation, DeAscentis and a friend rushed to the girl’s restroom to sort out her frenzied hair and fix her torn nails. Thankfully, Emma DeAscentis survived this vicious attack, and can live to tell the tale. We at the Sibling Victims Unit are putting together a strong case against the younger DeAscentis in the hopes that we can one day bring him to justice. But until them, this case will remain a cautionary tale… of the Sibling Victims Unit. Until next time, America.