Girls’ Golf Team on Par for a Great Season 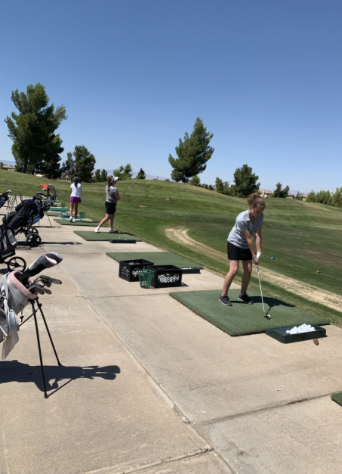 The team practices for hours from Monday through Thursday at the Rancho Vista Golf Course to improve their skills and techniques. When she’s at practice, Halle Boulger, a senior on the team, works on improving her short game and strokes while putting. She also enjoys watching her teammates improve on various skills during the offseason, as they hope the team maintains their Golden League Championship title for the 4th year in a row.

Eme Larsen, a senior, has played on the girls’ golf team for the past three years. She spent the summer working on consistency in her drives and decision-making skills on the course. Eme mentioned that there are “A lot of freshmen this year and they’re all exceptionally good.” The past three years Highland High School has won Top Individual Player. Hopefully, the new freshmen can help the team earn this title on top of the Golden League Championship this year.

Alysha Dijamco has been on the team for four years and, like most of the other seniors, enjoys golf because it is a calm and fun sport that anyone can play. She practiced everyday over the summer to improve her putting, chipping, and hitting. Surely, her hard work will pay off in the upcoming season.

Coach Mahady hopes to “Win the league championship and represent our school and the league at CIF Regionals.” The team is working hard to defeat their biggest competitor: Highland High School. However, they must also focus on performing well in tournaments against other schools like Walnut High School, Hart High School, and Saugus High School.

Coach Mahady believes that the team includes a “Solid group of seniors – Alysha Dijamco, Madison Shafer, Eme Larsen, and Halle Boulger – who have shown incredible improvement since joining the team.” These seniors are joined by the “Fab Four,” the best freshman talent that the team has ever seen. Coach Mahady projects that “Ninth grader, Kylie Warner, has a chance to win the Individual Golden League title.” Taylor Waters, Terry Muller, and Samantha Reifer may qualify for post-season matches as well.

Hopefully, with the new freshmen, the team can maintain their Golden League streak with an additional Individual Golden League title. Due to their hard work and endless effort, “the future is bright,” as Coach Mahady predicts.