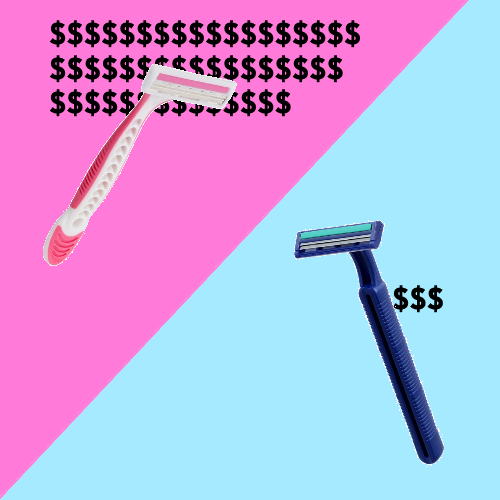 Half of the human population faces gender-based price discrimination every day, yet remain unaware of it. All around the globe, women are paying more for goods and services. Though not an actual tax, the Pink Tax refers to the products and services marketed at a higher price for women than for men. This tax also refers to tampons and pads as “luxury” items, and thus prices it as such.

Somewhere between the 1930s and 1960s, the sales tax system was drafted. Later, more and more people noticed that the products involved in this phenomenon were pink, thus coining the term “Pink Tax.” Today, this marketing tactic exists for no good reason other than for profit. Though it is often argued that certain goods or services for women require more effort and money to make, this is frequently untrue in various situations. A common example is comparing razors directed to different genders. Oftentimes, the most basic, stripped-down razor for women (probably in the color pink) costs more than the most basic  razor for men.

According to research, women pay more 42% of the time when purchasing goods targeted for females. A study done by the State of California in 1994 concluded that Pink Tax added up to about $1,351 in a year. Today, it is equal to $2,188.

Additionally, non-gender-specific services take a huge chunk off women’s paychecks. In certain cases, women are charged with higher mortgages as they are viewed with weaker credit attributes. There is no law that bars businesses from charging genders more for the same services. Furthermore, feminine hygiene products are taxed up to 10% more because they are viewed as luxury items. However, tampons and pads are basic necessities. In no way is going through monthly menstrual cycles a leisure or a choice; it’s part of human life. To categorize products needed roughly over twenty percent of a year as “nonessential” and “luxury” shows ignorance of the basic female anatomy.

To resist Pink Tax, you can raise awareness and opt for men’s versions. You can take a stand against such companies by spreading awareness to a friend or even by posting on social media with a hashtag. By doing this, we will be one step closer to working towards equality in all areas. As a consumer, you have the power of choice. You have the decision of directing your money towards whoever and whatever you’d like. By abstaining from purchasing overly female-targeted products, you can send a message to companies to stop making goods because you won’t buy them.

Society has come a long way towards gender equality. Through the Affordable Care Act and bills being proposed, we are one step closer, but there’s still a great distance to go. It is imperative that more and more are aware of the Pink Tax to be able to work towards a change in eradicating it.