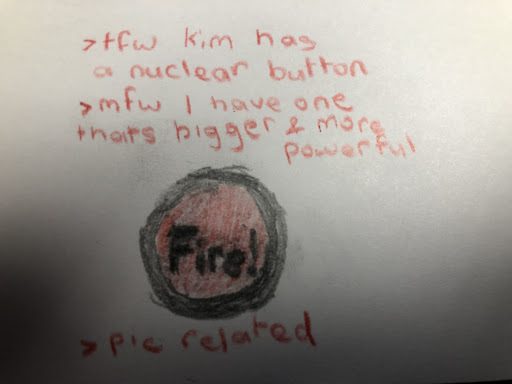 As news outlets upload new topics to be anxious about everyday, I’m starting to question the Orwellian possibility that war may be a made up construct to feign the United States power struggle and keep the population in constant fear and neuroticism. In the continued administration of DJ (Dictatorial Jaunt, not Donald John) Trump, war becomes a comedic concept with world leaders earnestly debating whose nuclear red button is comically larger and “more powerful”, whatever that means.

It gets slightly more urgent however, when Trump puts out the executive order to assassinate a top ranking Iranian general via drone strike. The rational seems fairly straight-forward, but maybe more consideration should have been into the choice of agitated a country that contains 10 percent of the world known oil source but hey, that’s just me.  Despite the comedy in its origin, people my age are pretty panicked about it which is pretty funny because the very same people ¨wanted to die¨ the day before. It’s highly unlikely that the draft will be enacted for societal reasons, but in case it does, I hope this article does not convince recruiters to make me pay my due diligence. In a day and age far from the last one, another World War sounds strange, especially with the introduction of new media, technologies, and ideas. One can only imagine the responses evoked from the people of today.

Self proclaimed twitter comedians will probably make witty yet politically incorrect jokes such as, ¨Edwards Air Force Base wasn’t kidding when they said their 2025 aviation programs were going to blow up” following an attack on the highly targeted AV air base. Anti-War petitions on Change.org and Gofundme will be created to virtually no effect. The US may reconsider immigration reform, funneling immigrants directly into the army to ¨earn their citizenship¨ and fuel the bloodshed on both sides. Soldiers will sit bored in their barracks as they play Super Smash Bros for the Switch and browse online forums. Battlefield selfies may become common in a generation of phone enabled adults. Military colloquialisms will undergo drastic changes, with major catastrophes being newly labeled as “bruh moments” and civilians labeled as “normies” accompanied by battle cries of “reeeeeeeee!”  In reality, however, it may just never happen. There’s far too much at risk (America’s oil source, and also the most important thing to the US government, profit) and no country really wants to go to war. Except North Korean, maybe.