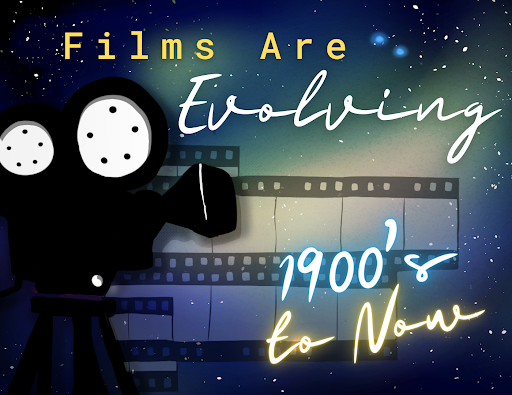 The silent silver screen is silent no more, as the vibrant hues of modern films dance in our visions each second. Since its invention in the late 1880s, motion pictures – otherwise known as movies – quickly began evolving from black-and-white films to high-budget, picturesque wonders.

First, I have to begin by talking about the glow-up of films. Movies these days are no longer equivalent to the tired trope of “frumpy girl with glasses.” No, they’ve gotten a make-over worth years of technological improvements. Now, they’re  HD. Their colors and “looks” can be finely tuned to the most minute detail. Drones, sky cams, telescoping arms, and sliders can prop cameras up better than the old, faithful crane and dolly,

And unless a film wants to go vintage, there’s no grit or grain. The advent of shiny new equipment propelled an exponential growth in film video quality. Truthfully, the crisp green grass on the screen looks more faithful to life than the grass in my backyard.

Moreover, computer-generated imagery (CGI) and visual effects (VFX) bring life to action scenes and hideous (sometimes beautiful) beasts. CGI existed in 1970s films, but filmmakers in the early 1990s were still working out the kinks and figuring out how to best use it. They have the hang of CGI now (just compare the old Jurassic Park or Godzilla movies to the most recent ones—stark difference).

More than just the visuals have drastically changed, though. Thankfully, filmmakers learned tact, handling controversial topics with silk gloves instead of pummeling unfunny, offensive jokes into the ground. (Even if produced today, it’s near impossible for an insensitive work to shoot up in popularity and turn into a classic like the controversial Gone With the Wind.)

Nowadays, movies offer a glimpse into our culture. Films like Don’t Look Up and Get Out bring much-needed awareness to issues spanning from climate change and political corruption to the dangers of covert “casual” racism. The film industry has dramatically improved in portraying the “-ism’s” (racism, sexism, antisemitism, etc.) in media. I’m glad (most) filmmakers adjusted accordingly and understood that maybe using film to demean a marginalized group isn’t the best method of garnering laughs.

Not to mention, more and more casts include women and underrepresented racial/ethnic groups as the modern push for diversity continues. Most stars on the screen were typical white American men; the representation of Black, Latino/Hispanic, Asian, Native American, and Pacific Islander stories different from an essential white sitcom family can educate audiences on minority issues and the beauty of other cultures. It also allows children and adults to “see” themselves on the screen.

Lastly, kids these days (yourself probably included) likely can’t distinguish between a floppy disk and a VHS tape. We’re accustomed to crowding into the semi-lush recliner chairs of CineMarks and ordering tickets online, avoiding the human interaction offered at the ticket booth. Alternatively, we stay home, chowing down on microwave popcorn in front of our laptops wrapped in a blanket burrito (no judgment). Or, maybe we sit in the cafeteria, catching up on the latest films on our smartphones.

My point: movie-watching is more accessible than ever. You can watch it on the go, at your house, or in a big theater; you can stream or rent whatever your heart desires in a few clicks. Gone are the days of BlockBuster and Netflix-mailed DVDs.